Turbidity is one of the organoleptic characteristics of water, which indicates a decrease in water transparency due to the presence of suspended fine organic and inorganic impurities. The most common pollutants that muddy water are sand, clay, various carbonates (water like milk), silt formed by phyto- and zooplankton (yellow-green water with a bad smell).

Let’s consider three main types of water consumed by humans, both for drinking and household purposes, in terms of sources of turbidity. 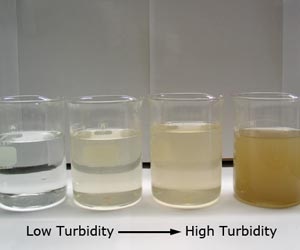 How is the turbidity of water determined??

The analysis consists of comparing the water sample with standard samples. Traditionally, turbidity was determined by the suspension of kaolin in the water and was expressed in grams of kaolin per liter of water. Today, the polymer solution used is formazine, and the resulting value is characterized by the index of turbidity units per liter of water – NTU (Nephelometric turbidity unit).

In the modern world there are devices for such analysis – nephelometers.

The World Health Organization sets the maximum turbidity of drinking water at 5 NTU.

Characteristics of water by origin

Groundwater can have different turbidity. Its increase is usually due to sludge formations and colloids of organic substances. Also affected by discharge of untreated sewage. In addition to high turbidity, such waters are usually characterized by increased color and odors.

Turbidity often increases during flooding as particles deposited on the seabed are lifted.

According to statistics, well water has an increased turbidity in 30 – 60% of cases. The water quality in this case is determined primarily by the depth of the well. The first cause of reduced water clarity is increased clay and sand particles that get into the water during pumping. The second cause is iron and manganese, this turbidity appears some time after the water is pumped to the surface, when the iron changes from soluble divalent form to trivalent form.

Tap water usually has a fairly high transparency, but still quite often the turbidity indicators are elevated. This is due to the fact that it is not always fully purified at water treatment stations and in the process of movement through the pipes flushes biological fouling from their surface.

The consequences of using turbid water

Turbid water is not recommended for drinking due to the fact that it often indicates microbiological contamination of water. In addition, water with a turbidity greater than 1 NTU cannot be disinfected with ultraviolet light, and requires increased consumption of chemical disinfectants. 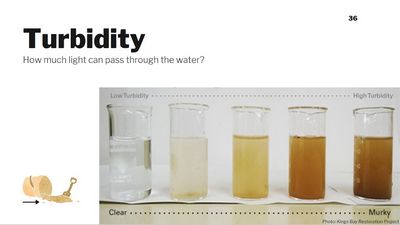 As for industrial and domestic use of such water, the particles can clog small nozzles of irrigation systems, accelerate the wear of ball valves, pipe fittings, leave dirty traces on contact with surfaces.

How to reduce turbidity?

In modern water treatment, there is a lot of equipment that is aimed at cleaning water from mechanical particles. Below we will try to give brief characteristics of the main mechanical water filters. 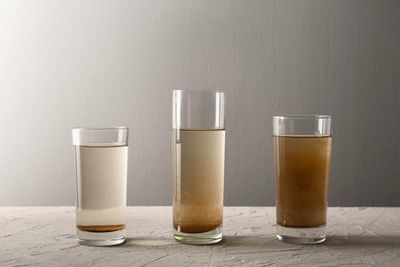 They are a plastic bulb, inside which a replaceable cartridge of polypropylene filament or polypropylene foam is installed. Depending on the initial pore size, the cartridges can remove particles larger than 1, 5, 10, or 20 microns. Such devices are designed for use in the conditions of apartments and homes with medium turbidity of water. Also used for post-treatment before the membrane systems and suitable for deep pre-treatment if you have turbid water in the pool.

Depending on the size of the material grains are formed holes between them, which can pass a certain size of particles. These filters are able to trap particles of sand, clay, silt ranging in size from 10 microns. It is worth noting that some filter media exhibit light catalytic properties, which can trap small amounts of dissolved iron and manganese. Solutions are used for very turbid water, both in homes and factories.

On their surface, grooves of a certain size are applied, which allow the compression of the discs themselves to form a filtering body. These devices can hold back quite big particles from 50 microns in size. Generally the particle size is controlled by the filter setting (disc compression ratio). Best suited for the treatment of water for irrigation and drip irrigation systems.

Filters represent a cylindrical body, inside which there is a special filtering element, consisting of a mesh metal cylinder. The size of the particles removed is determined by the size of the holes in the filter element structure. Usually it’s 90 – 100 microns. Depending on the size and capacity, can be used in both domestic and industrial applications.