Water Code of Ukraine says: “Waters (water objects) are exclusively property of Ukrainian people and are provided only for using”. This truth is clear for all. As for water supply and wastewater disposal, obligations regarding it are assumed by state bodies. The owner of Ukrainian Vodokanals is the state. But it`s not the case in all countries. Private companies can also be engaged in water supply. Today’s topic of our blog: why do they do it and what are the consequences of private management of natural resources?

Privatization of water means transferring control and management of water resources to business. Its purpose is first of all to improve the quality of the water supply. It does not always turn out this way. Today, the issue of water privatization is a controversial one: somewhere it has improved the quality of service, somewhere on the contrary it has failed.

In the United States, Europe and Latin America, it was widespread since the 19th century. Private companies were players in the water supply market until the beginning of the 20th century, when they could not cover the needs of the rapidly growing population, unlike public utilities. Private water utilities received a second round of development in the early 1990s, when free market policies were actively pursued, communist regimes collapsed, and Thatcher made great privatization.

In England and Wales, the first private companies emerged in the 17th century. In different periods, the share of private companies varied greatly: from 40% in the mid-19th century to 10% at the beginning of the 20th, and up to 25% at the end of the century. After the great privatization initiated by Thatcher in 1989, almost the entire water and wastewater sector went into private hands, and only in Scotland did water management remain in the hands of the state. 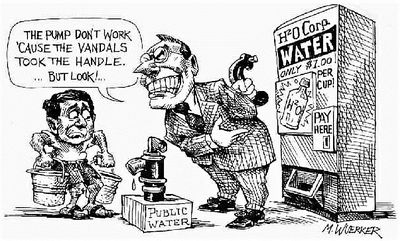 In France, water supply systems have always been jointly owned by business and government, time has changed the levels of influence, but the overall structure has not. Today, the largest companies are Veolia and Suez Environnement, founded in the mid-19th century. At the end of the 19th century, the government was dissatisfied with rising rates and a lack of connections in poor neighborhoods, so it did not extend concessions to private companies, creating municipal utilities. The share of the private sector began to increase already in the 1930s of the 20th century, reaching more than 80% of the market. Today, private companies operate on the principle of a lease agreement, with large investments resting on the shoulders of the state.

Germany also has private water networks, but most are still in the municipal sector.

In the United States, the situation is also interesting. Today, some systems operate in a cooperative format between business and government. Private companies operate about 2,000,000 plants across the U.S. in conjunction with government management through territorial communities.

The situation in Chile is also interesting. In 1980, the Constitution was approved, which provided for the exclusion of the state from the control and management of water resources. Up to now, 90% of water resources are controlled by private transnational companies. The disadvantage of the privatization scheme in Chile is the uneven distribution of water, which means that more than 71% of the water is used for agriculture, which causes a lack of water in the households, especially in times of drought. 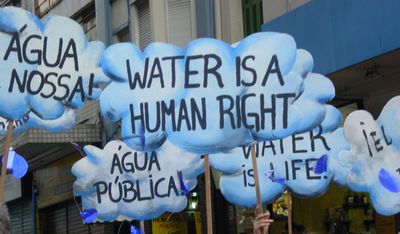 In Latin America, Africa, and Asia, private European and local companies emerged in the second half of the 19th century, when their numbers declined in Europe. Today, private companies have been operating in Côte d’Ivoire since colonial times, in Senegal, partly in Morocco, etc. 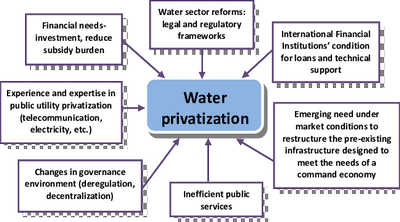 Roughly speaking, there are two forms. Full privatization envisages transfer of all assets to a private company. In a public-private partnership, the ownership of assets remains with the state, and private companies are delegated certain functions for a certain period of time.

Why is water privatized??

Motives for privatization can have many root causes, both economic and political. They also determine the form of privatization. For example, in developing countries the aim is often to reduce the financial burden of the state (in which case privatization is often done through a concession or total sale of assets) and/or to improve services, then partial privatization through lease or management agreements.

Ideology also plays a role: market-liberal currents are in favor of privatization, while leftist currents, on the contrary, are strictly against it. Conservatives are predominantly in the middle, where models of privatization are chosen that are optimal for the initial conditions.

Let us consider the goals of privatization in more detail. When water supply systems are inefficient and unprofitable: there are great water losses and emergency shutdowns due to the worn-out pipelines, water supply is only scheduled for a few hours a day, or even days a week, low water quality due to outdated treatment systems, low bills. In this case, it is believed that in a market environment, the provider will be interested in improving the quality of services through upgrades and effective management, which will lead to an increase in its profits. These were the root causes of privatization in Algeria, Cuba, Saudi Arabia and Colombia. The counterarguments against privatization are that there is usually a monopolization of the sector by one big player and the situation does not change in the absence of competition.

Very often the reasons for privatization of water supply systems are pragmatic and based on the influence of the International Monetary Fund, World Bank and other assistance organizations. Transfer of water services to private sector is sometimes a condition of credit, similar to the Ukrainian sale of land. This is the situation in Latin America (Bolivia, Ecuador, Columbia, Peru), in some African and Eastern European countries (Albania), where the water sector occupied a large share of budget investments.

When there are no more problems with access to water and the quality of services is satisfactory, then sometimes the management is transferred to private business in terms of profit. This was the case, for example, in Berlin, when the situation led to higher tariffs and losses for the state. In Chile, where the government involved a private investor in the construction of a missing wastewater treatment plant, there ended up being a complete privatization of the water supply. 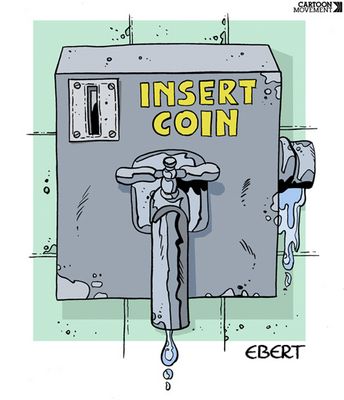 Also, fiscal motives are present in countries with poor water quality and access to water. Governments are not always able to allocate enough funds to provide water to a growing population, and sometimes to maintain existing infrastructure, this leads to poor service levels, deteriorating conditions of hygiene and sanitation. The introduction of private capital is sometimes a lifeline for countries. 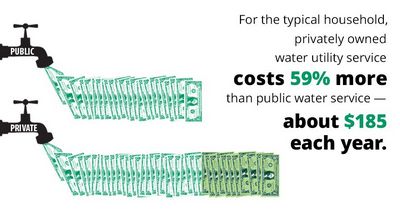 In this case, there are a number of positive as well as negative consequences. Below we describe them.

Some studies say that access to water is increasing because the quality of services is improving, but other data say that higher tariffs make water unaffordable for the poorest part of the population. However, everything depends on the model of the system and many economic and ethical issues.

Privatization of the water sector in Argentina led to a decrease in infant mortality because it is directly related to water quality. During the privatization of water in Argentina from 1991 to 1997, it fell from more than 26% to 8%. The reason is that water companies were held to standards unlike public utilities.

What happens to tariffs?

The question of tariffs is quite complicated, because it depends on the initial tariff policy of the state, the form of privatization and the conditions set. Unlike a state enterprise, a private one cannot operate at a loss, since it has no additional sources of financing, so tariffs are often increasing, but the quality of services is also improving.

In fact, it also depends on the initial conditions. Private companies due to effective management and targeted use of investments are able to improve efficiency of enterprises and reduce external debts. Profitability of such enterprises, despite the apparent attractiveness for investors, is not high – the average annual return on invested capital was only 7%.

Why Is Privatization Of Water Now Trending?

We have tried to summarize the essence of the issue. You may also be interested in how water tariffs are formed and how it can be saved.