The question of nitrates in fruits and vegetables is very popular now, but the question of their presence in the water is raised much less frequently, although the well water may actually contain abnormal concentrations of nitrates. The maximum allowable concentration (MAC) of nitrates in drinking water is 50 mg/dm 3 . But there are also nitrites – compounds that are produced mainly during the life of microorganisms, their MAC is less than 0.5 mg/dm 3 .

How do nitrates and nitrites end up in water??

There are always nitrates and nitrites in the soil, surface and ground waters, it is caused both by natural processes of nitrogen cycle in the nature and anthropogenic influence.

The natural introduction of nitrates into water comes from the decomposition of animal and plant proteins by microorganisms. First, ammonium compounds are emitted, which oxidize to nitrites and nitrates when in contact with air. These contaminants are usually very low and do not negatively affect water.

Still, the main cause of nitrates entering the water is the washing away of fertilizers from fields and vegetable gardens. As they are highly soluble in water and retain almost nothing in the soil, they can penetrate quite a long distance, polluting surface water.

The second source of nitrates is industrial effluent. It is also important to understand that gases from chemical plants of the nitrogen and oil refining industries quite often contain a lot of NO2, whereas metallurgical plants practically do not emit such pollutants. This gas is called fox-tail because of its characteristic red color. In interaction with water and air oxygen it forms nitric acid. Besides so-called “acid rain,” nitric acid can react with minerals to form nitrates, which also flow into water bodies. 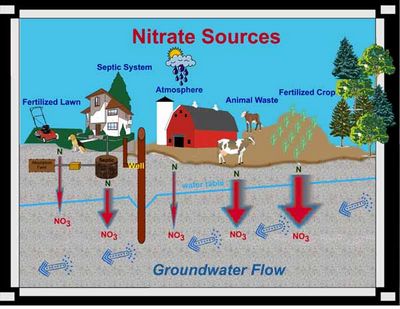 Surface water sources include bodies of water, rivers, lakes, reservoirs, as well as wells and shallow wells. It is important to note that about half of wells in Ukraine contain elevated levels of nitrates, and sometimes the excess reaches ten times the MAC.

As for nitrites, they always indicate microbiological contamination of water from domestic wastewater and runoff from agricultural enterprises. As we mentioned earlier, microorganisms oxidize proteins to ammonium, and ammonium is already oxidized to nitrite. Also excessive nitrites and nitrates in water are observed around cattle grazing fields.

What are the dangers of nitrates in water??

The most serious consequence of nitrate consumption is the formation of methemoglobin. It is formed when nitrate ions oxidize hemoglobin in erythrocytes, resulting in impaired oxygen transport to human tissues, followed by disruption of the nervous system and enzyme synthesis.

A healthy person typically has a methaemoglobin level of less than 3 to 4 percent. Asymptomatic cyanosis (blue skin) in adults and children caused by lack of oxygen supply to tissues or by hypoxemia may occur when the content is up to 10%. At a level of 20-50%, there is a marked cyanosis accompanied by headaches, shortness of breath, weakness, tachycardia, dizziness, and loss of consciousness. Symptoms are more pronounced in children, especially during the first six months of life, at 25-40% and higher levels of methemoglobin in the blood for children there is a high risk of death. Most child deaths have been recorded when using water that contains 70 – 250 mg/liter of nitrates for drinking and preparing baby formula. Such water is often found in wells in Ukraine. 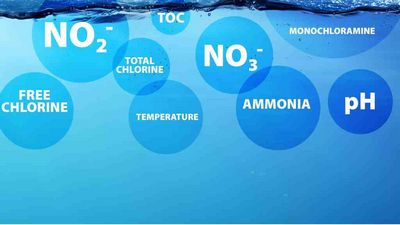 Also, nitrates and nitrites can affect the development of the fetus, so it is dangerous for expectant mothers to drink water with high nitrate content.

Another dangerous phenomenon is the problem of the gastrointestinal tract, caused by the multiplication of unfavorable microflora.

How much nitrates are in water?

Water and food are major sources of nitrates in the human body. We will leave it to other experts to talk about food, but we will talk about water ourselves.

The most dangerous in terms of nitrates poisoning is water from wells and surface sources. About half of wells in Ukraine have elevated levels of nitrates. This is especially evident in the areas that are used for the cultivation of crops in the summer time. In some areas of Prikarpattya there are excesses of nitrates in well water up to 55 – 100 mg/l, but in the Cherkassy region the levels reach 10 – 150 times the MAC, ie 180 – 5600 mg/dm3 . Such levels are toxic for an adult, and even more so for a child.

It is worth noting that water that is contaminated with nitrates has a very pleasant taste and is not defined by taste characteristics.

Tap water usually meets the normative values of nitrates for drinking water. For Kiev, this figure usually does not reach 20 mg / L, but the monitoring study of water in the city of Kiev is not necessary. Kharkov in 2017 showed a 1.5 to 2 times excess of the normative nitrate content.

Water from deep wells (artesian wells) are the safest in terms of nitrate pollution.

There are two effective solutions:

Reverse osmosis membrane is a fine-pored fiber with a pore size of 0.001 – 0.0001 micron. Thanks to this pore size, the membranes are able to retain up to 99.8% of all impurities, including nitrates and nitrites. There are both large plants that are used in drinking water and food production and systems for domestic applications. Read more. 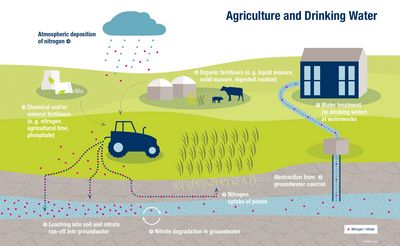 Although the established MAC value for nitrates is quite high, for children (especially in the first six months of life) even a nitrate content of 20 mg/l can be dangerous. In order to guarantee the prevention of nitrate poisoning from water, we recommend not to consume well water at all without pre-treatment, or to monitor it at least four times a year. It will also be rational to limit the use of tap water for drinking. These measures are especially categorical for young children.