The problem of solid domestic waste utilization is becoming more and more pressing lately, both from the ecological and economic point of view. Figure 1 shows the dynamics of the ratio of the main types of MSW recycling and disposal from 1994 to 2014 in the countries of the European Union. According to statistics, the European Union (EU) countries produced 240 million tons of MSW in 2015, of which an average of 47% was recycled and composted, 27% was incinerated and 25% was landfilled. Nevertheless, in some countries more than 80% of garbage still goes to landfills. Taking into account that the average amount of MSW per person in the EU is 477 kg/year and the population of the region is 740 million people, it can be calculated that more than 100 million tonnes of MSW are sent to landfills annually. 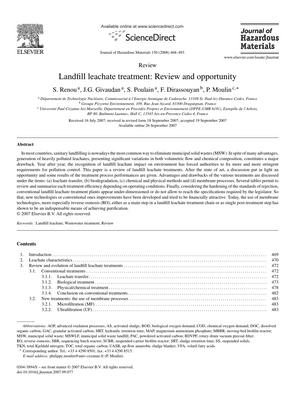 One of the most serious problems arising from exploitation of landfills is the ingress of extremely toxic liquid effluent into the environment, or so-called leachate. Sources of filtrate formation are sediments, which, passing through the waste layer, wash out soluble substances in water, as well as decomposition products of waste organic origin. Thus, the annual volume of leachate formed in landfills can be estimated based on the average annual precipitation in the region and its area, the intensity and area of evaporation, as well as the amount and morphology of waste (Table 1).

The leachate contains partially decomposed organic waste, metal corrosion products and other water-soluble contaminants, including non-ferrous and heavy metals, as well as toxic or biologically active contaminants of anthropogenic origin, such as pharmaceutical industry waste and emerging micro-pollutants. 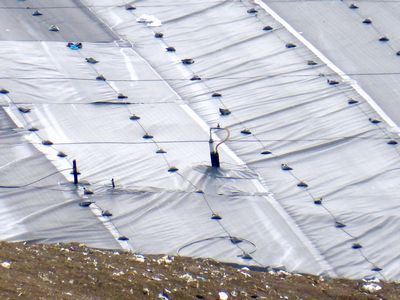 The main contaminants contained in leachate are considered organic compounds, which are characterized by indicators such as COD and BOD, mineralization, ammonia nitrogen, and heavy metals. Concentrations of these components depend on both the morphology of the waste and the age of the landfill. Table 2 shows the average concentrations of pollutants in landfill leachate.

Table No 2 Average concentrations of pollutants in landfill leachate

Landfill leachate poses a serious threat to surface and groundwater resources, in many cases with invisible long-term effects. Lack of available and efficient technologies and business models led to inadequate handling and illegal dumping of waste, despite a number of EU directives on MSW handling. Although the volume of leachate, compared to municipal wastewater, is much smaller, its toxicity and concentration pose a serious threat to human health and the environment by contaminating drinking water sources. According to experts, the problem of leachate is relevant not only for existing landfills, but also persists for tens and even hundreds of years after their closure and reclamation, posing a potential threat to the environment as well as public health and safety.

Legal regulation of the situation with landfills

The EU directives (The Landfill Directive 99/31/EC, Waste Framework Directive 2008/98/EC (EC, 2008), Urban Wastewater Treatment Directive 99/31/EC (EC, 2001b), Water Framework Directive 2000/60/EC (OJEC, 2000)), regulate the treatment of waste and landfill leachate. The main objectives of the directives are to reduce the amount of waste disposed of in landfills, minimize the negative impact of landfills on the environment and reduce environmental risks associated with the operation of landfills. In Ukraine in 2012. came into force the order of the Ministry of Regional Development, Construction and Housing and Communal Services of Ukraine № 421 “On approval of the Methodological recommendations for the collection, disposal and neutralization of landfill leachate. The mentioned document recommends to use physical, physical-chemical, chemical and biochemical methods to purify leachates.

All of the above methods have certain drawbacks and restrictions on their use, due to the complex physicochemical composition of the filtrate. The most promising method for purifying filtrate is the use of membrane technology based on polymeric thin-layer reverse-osmosis membranes. In international practice special membrane modules are used for filtrate purification – with wider channels and a special spacer structure which makes them more resistant to contamination (Fig. 3). 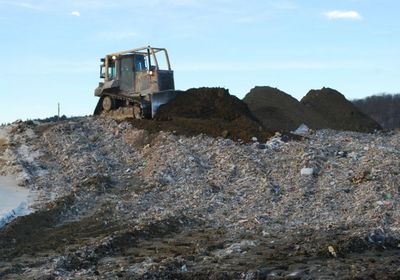 Installations using such membranes are in operation at hundreds of landfills around the world and are becoming more and more accepted as the industry standard. Leachate is separated on membrane elements into two fractions – 70-75% of treated leachate (or permeate) and 25-30% of concentrated fraction (or concentrate), containing almost all impurities. In most cases the latter is returned to the body of the landfill or is sent for evaporation. 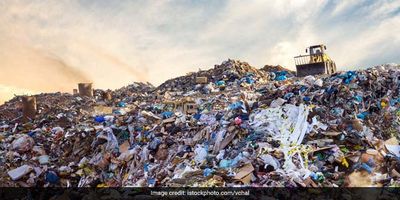 The quality of the filtrate treatment is sufficient to discharge it either to a municipal sewer or to the environment. LLC “NPO Ecosoft” together with the German company ROCHEM GmbH (Hamburg), one of the pioneers and world leaders in the production of membrane equipment, offers containerized units for processing of solid waste landfill leachate in modular design. Installations include the following stages of purification:

The plants are available as mobile containerized (Fig. 4), as well as in stationary (Fig. 5) design. ROCHEM has many years of experience in the design, construction and operation of membrane filtrate purification units, which are. ROCHEM units are successfully operated in more than sixty landfills around the world.

Wastewater treatment at Kiev landfill No. 5 in Podgortsy

Such technology is used in Kiev landfill No. 5, where a ROCHEM membrane unit has been operating since 1998, with a capacity of 200-240 tons of leachate per day. In 2014, specialists of the Ukrainian company LLC “NPO Ecosoft” together with engineers of ROCHEM conducted diagnostics of the plant, based on the results of which recommendations for its modernization were developed. In 2015, the obsolete automatic process control system was upgraded, outdated control and measuring devices and electric power equipment were replaced and pumps were overhauled. As a result of this work, after more than 15 years of operation and two years of downtime, the plant was put back into operation with the designed capacity. Modern ACS installed (Fig. Ecosoft and ROCHEM specialists are able to remotely monitor and adjust technological parameters, ensuring reliable and safe operation of the equipment.

Taking into account the positive experience of ROCHEM unit operation, in 2016 the Kyiv City Administration decided to further increase the capacity of the filtrate processing unit. 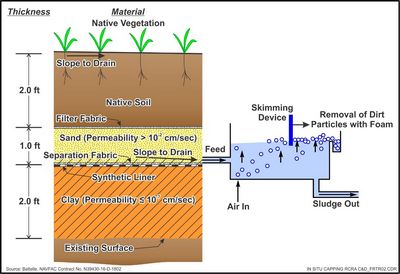 In 2017. NPO Ecosoft LLC performed work on the design of technical re-equipment of the existing unit with a step-by-step increase in equipment productivity to 350 and 900 tons of filtrate per day. The developed design and estimate documentation received a positive conclusion of the State expert appraisal. In the same year the first stage of works has been fulfilled – an additional membrane module for 130-135 tons of filtrate per day was installed and put into operation. In 2018. The second stage of technical re-equipment was launched – preparatory works and delivery of one containerized ROCHEM unit with productivity of 200 m3/hour were completed. Today, the total capacity of leachate processing plants at Kiev landfill No. 5 is 530-550 tons per day. On April 25 the mayor of Kiev V. Klitschko checked the work of the installed equipment and announced that in 2019. Delivery of two more ROCHEM container plants is planned and the second stage of technical re-equipment of Kiev landfill in Podgortsy is planned to be finished with output of 900 – 950 tons per day.