Ion exchange is one of the most effective technologies of water softening. It is widely used in both domestic and industrial applications.

The ion exchange process is a reversible chemical reaction in which ions are exchanged between the medium and the surface of the ion exchanger.

Let’s try to show how it works using water softening or cation exchange as an example.

In the process of purification, the ions that are present in the water (e.g. calcium and magnesium) “knock out” the counter ions (e.g. sodium) from the matrix and take their place. It is important to note that they are fixed stoichiometrically – one Ca 2+ ion will replace 2 Na ions + .

Once most of the surface of the ion exchange resin is occupied by calcium and magnesium ions, it is necessary to regenerate. It consists in treating the ion exchange resin with a concentrated solution of reagents. In the case of water softening this is concentrated NaCl or HCl brine. After washing the solution with ions washed out of the resin is discharged into the sewage system and the resin can again purify water.

If we consider the process in detail, it can be described in the following stages 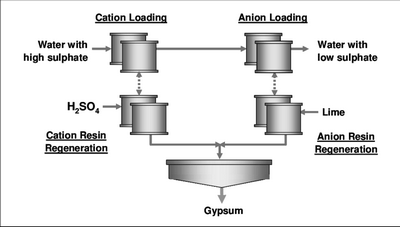 In the case of the anions, the processes are similar.

1. Working exchange capacity – the amount of ions which can be absorbed by a certain volume of resin, expressed in mg-eq/l until the moment of slippage. For example, for quality cationic-exchangers can reach 3000 mg/l.

2. Mechanical strength (abrasion) – describes the ability of ion-exchange resists abrasion during filtration and washing, loading and unloading. Some materials have a service life of up to ten years.

3. Osmotic stability – the ability to withstand changes in the composition of water without cracking granules. 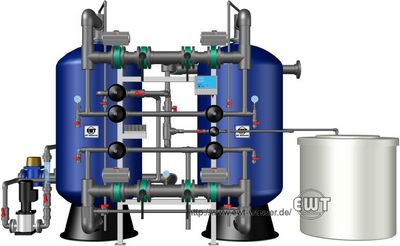 4. Chemical stability – ability of the material to resist the influence of oxidizing agents (chlorine, nitric acid, etc.).), a change in the pH of the medium.

5. Thermal resistance – the temperature limitations that allow the filter loading to work without destroying the granules. The operating temperature for cationic-exchangers is up to 150 °C and for anion exchangers up to 60 °C, max. 80 °C. 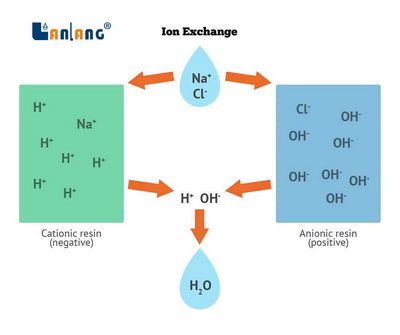 Both natural substances and man-made polymers are used as ion exchange resins.

Zeolites, some clay minerals with a silicate structure and feldspars are very commonly used as natural substances. These materials have a relatively low exchange capacity. On average it is 3 – 5 mg-eq/l, rare minerals 8 – 11 mg-eq/l (this applies to feldspars). In modern water treatment zeolites are not used as ionites, but are widely used as loads for mechanical filters. 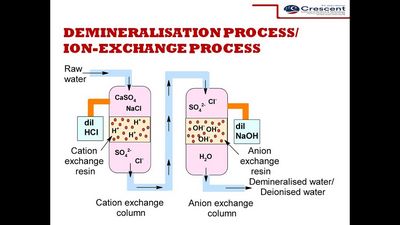 Roughly speaking, they consist of a framework – a matrix and functional groups (fixed ions), which are rigidly attached to the matrix and interact with counterions.

Resins are divided into three main types: cationics and anionics. 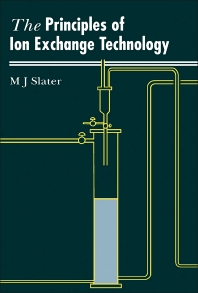 Strongly acidic cationic exchange resins – have as functional groups the sulfogroup -SO3 and phosphorus group -RO3. They are characterized by spherical granules with yellow or amber tint. They have a high exchange capacity, the highest osmotic stability (up to 120 ° C), work at any pH level. They are mostly used to soften water and are supplied in a sodium form, which makes them easy to regenerate with sodium chloride or food salt.

Low acid cation exchangers contain carboxyl groups as functional units -COO, -OH. They are colored slightly green or white, are readily reduced with chloric acid, and are also popular as a component of mixtures of.

– anion exchangers – Anion (OH- , Cl- ) performs the role of counterion. Used mainly in industrial processes, as they only work in an alkaline medium. 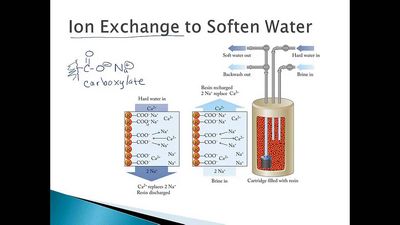 Strong-base anion exchangers have a quaternary ammonium group as a functional group. Yellow or light-yellow color is characteristic. They are often used to separate metal ions at any pH. They are used to remove various anions, including hydrocarbonates, sulfates, etc. 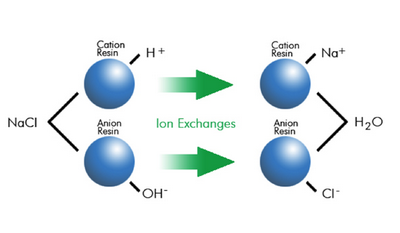 Low-base (low-base) anion exchangers have amino groups of different substitution rates as functional groups: -NH2 + , =NH + . They have a narrow application, mostly in chromatographic analysis. Only works in an acidic environment.

– amphoteric – They contain different groups and are used in narrow applications. 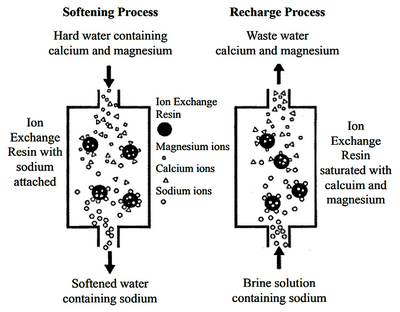 When in contact with water, the cationite absorbs positive ions of metals and other ionic substances contained in water, releasing an equivalent amount of hydrogen ions. The anion exchanger absorbs negative ions (bicarbonates, sulfates, organic acids, etc.д.), releasing an equivalent amount of hydroxide ions. Such resins are used in water desalination as a second stage. The resins are not regenerated and are unloaded when used up, or separated and regenerated separately.

A traditional softening system consists of a cylinder with filter media and a solvent tank inside.

The filter is connected to the cold water supply. It passes through the pre-installed main filter cartridge, which filters out impurities larger than 5 μm and enters the filter housing (1). The water seeps through the resin layer (2), which exchanges certain cations or anions from the water with ions from its surface. Purified water flows through the bottom distributor (4) and the central pipe (4) to the consumer.

When the resin reaches the end of its service life, even before the contaminant has been spiked, the filter is switched to the flushing mode. In modern equipment, the automation is capable of performing this process in a fully automatic mode with minimal user involvement. 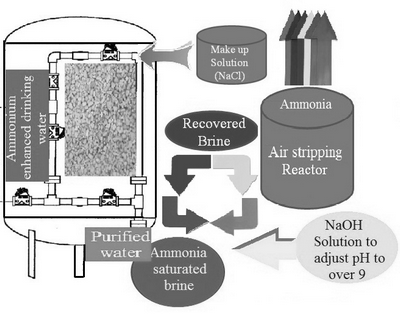 flushing with reagent solution from the solvent tank;

flushing with a direct flow of water to remove excess reagents;

filling the salt reservoir with water.

Another common design of such a filter is a compact unit, which combines a tank with cationite and salt-solvent in one body. It is used preferably in private households for water softening.

The dimensions of filters and volumes of filter media can be found in this handbook.