In this question, let’s start with what water coagulation and flocculation are all about. In simple terms, these are processes of enlargement of small colloidal particles, which cause water to become turbid and do not settle under the force of Earth’s gravity. For this purpose, a substance is introduced into the water, which, thanks to certain interactions, causes the particles to stick together with their subsequent deposition. As for the principle of operation, there are certain differences, particularly in what particles and how exactly the reagents can affect.

Below we will try to schematically display how coagulation and flocculation processes in water treatment happen, and then tell in details what these substances are.

Coagulants are, in fact, inorganic salts which, when introduced into water, form particles with a charge opposite to the surface contamination. Then these particles are attracted to the surface of contaminants and form conglomerates, i.e. flakes.

It should be noted that coagulants are salts of weak bases, which, when added to water, can hydrolyze, i.e. to transform into insoluble condition. Predominantly two cation-based reagents are used:

The reason for using these two reagents is their high efficiency, but low cost. In addition to dirt particles, such coagulants partially fix ions of hardness, heavy metals, iron, organic contaminants on the surface, and thus can reduce not only turbidity, but also the content of other impurities. 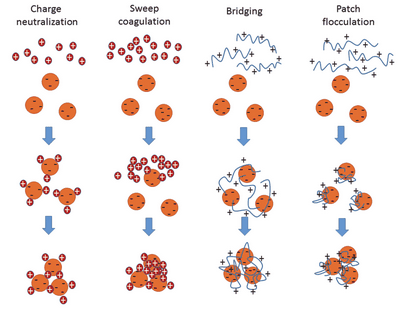 Due to the fact that aluminum hydroxochloride is a coagulant for drinking water in water supply systems, sometimes there are exceedances of its MPC in drinking water samples.

It is also worth noting that the best coagulant for swimming pools today is also a mixture of organic and inorganic aluminum salts.

2. Then the aluminum or iron cations can be hydrolyzed, in other words, they react with the water to form insoluble particles.

3. In parallel, hydrogen ions in natural waters are bound by free carbon dioxide.

4. Ferric hydroxide in an alkaline medium (>9) produced by liming, is able to oxidize to a less soluble and more stable Fe(OH)3.

The coagulation process takes 4-5 minutes. At first there is a sharp turbidity of the liquid, as particles of hydrolyzed bases begin to stand out, then they gradually “stick” with mud, enlarge into large flakes, which by their own weight sink to the bottom of the container.

The parameters affecting the coagulation process are:

The flocculation process is also often referred to as coagulation; in fact, it is auxiliary.

A flocculant is an organic polymeric high molecular weight substance with long chains. The charges of the flocculant and coagulant are usually opposite, respectively. 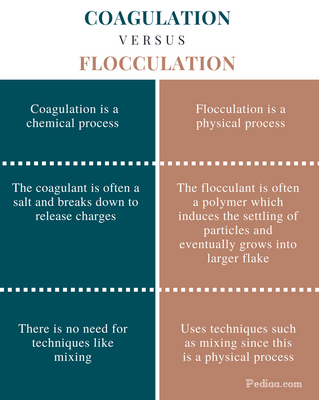 Flocculation aims to strengthen the flocs and ensure their stability by enhancing the effect of the coagulant. The principle of action of flocculants is based on the formation of molecular bonds between flocs, that is, flocculants are the same organic coagulants.

In industrial water treatment predominantly polyacrylamide and its modifications are used, because it is highly effective at a rather low cost.

Flocculants can generally be divided into four types:

In Ukrainian water utilities, sodium silicate and polyacrylamide flocculants are used together with aluminum hydrochloride coagulant.

We have tried to tell briefly about coagulants, flocculants and their principle of action, if you have any additional questions, write in comments.