Today we’re going to talk about what path water takes on its way to our tap, and the disadvantages and advantages of water treatment systems working in Ukraine. Many people complain about the quality of water, but not everyone knows why it is so.

Where does the water come from??

Water for a central water supply system can come from two sources – surface reservoirs and wells. Sometimes a mixture of waters is also used. For example, Kyivvodokanal gives people different water – from Dnieper, Desna and 363 underground wells, but a small town Brovary in Kyiv region receives only groundwater. 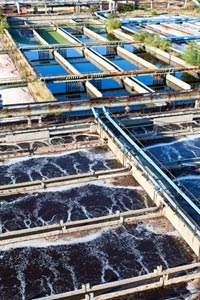 Let’s understand the difference in the initial composition of these waters, what are their disadvantages and advantages.

River or lake water is often characterized by a number of specific problems that need to be addressed: 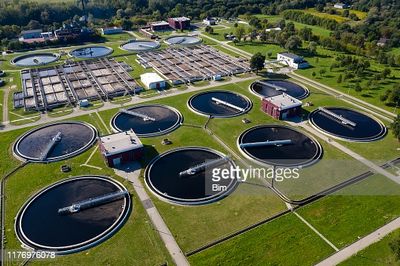 Depending on the region there may also be increased hardness, iron, heavy metals (industrial regions), nitrates and pesticides (agricultural land).

As for borehole water, it has quite a different specific problem. These can include water hardness, high iron and / or manganese content, as well as hydrogen sulfide. Also you can observe specific impurities, for example, even artesian waters of eastern region, which are considered the most pure, because of the great depth of occurrence can be contaminated with ions of heavy metals. Historically, groundwater, even where they can provide a sufficient amount is ignored, as in Soviet times preferred the laying of long pipelines to the use of groundwater.

Accordingly, the processes are primarily determined by the source of water. Composition and concentration of contaminants mostly affect the amount of chemicals, modes of sedimentation and filtration.

From the list of typical water problems emerges the actual sequence of equipment of water treatment systems. We will consider separately the traditional water purification systems in Ukraine.

Traditional systems on the territory of Ukraine in general are identical, so as an example we will put Dnieper water treatment plant. It was built in 1939. Its nameplate capacity is 600 ths.m3/day, in fact, the station provides about ⅓ of this volume – 200 ths.m3/day. It supplies water to such districts as Obolon, Podil, Vinogradar and part of the streets along the ring road. 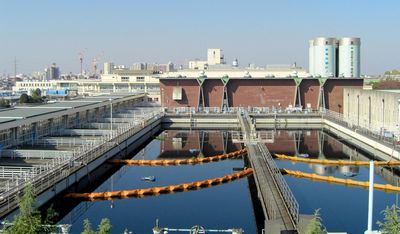 Water intake from the Dnieper

To avoid large debris entering the system, special grids are installed at the inlet.

Additional options are ultrasonic emitters to scare away fish and a special ventilation system that “chases away” oil stains or large clumps of algae.

They perform the function of pumping water to the wastewater treatment plant. The pumps themselves are underground, while their motors – large and noisy machines – are located on the surface. Today, new pumps are installed at the plant, but the 1939 equipment can still be operated. The replacement is justified primarily by the low energy efficiency of the old pumps. 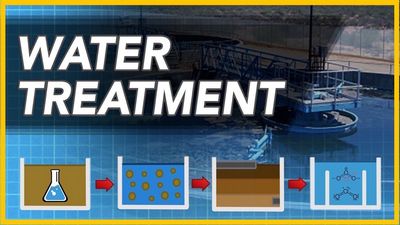 During the first lifting stage the water is chlorinated. It is used to disinfect water before it enters the system, to destroy some of the organic substances and to prevent the clogging of the water treatment system’s tank equipment.

First it goes to the mixing unit, where it is dosed with special reagents – coagulants, which cause electrostatic attraction of suspended contaminant particles. The most common coagulants are aluminum compounds (hydroxychloride and sulfate). Weight of used coagulants up to 40 tons per day. By the way, for this reason sometimes there is an excess of MPC of aluminum in tap water obtained from surface sources.

In addition, flocculants – polymeric acrylates (30-40 kg/day) and silicic acid (up to 2 t/day) are added to water. They perform essentially the same role of enlargement of particles, but already not by electrostatic way, but by formation of polymeric bridges. This also enables to collect organic substances – the fulvic acids that cause chromaticity of water.

As a result of added substances work “sticking” of small colloidal or suspended particles takes place, and correspondingly their mass and settling velocity increase.

Afterwards the water is sent to the horizontal sedimentation tanks. Structurally they are rectangular basins.

There are 9 of them at Dnieper station, the number depends on productivity of the system and the size of sedimentation tanks themselves.

Next is a block of rapid filters – these are tanks filled with sand which retain particles larger than 10-30 microns in the holes formed by their granules.

Then water is directed to the ozonization block. It consists of barbotage chambers that saturate the water with oxygen bubbles and ozone. It is known that ozone is a very strong oxidizing agent. It destroys molecules of organic substances and microorganisms, and thus provides water clarification and disinfection.

It should be noted that this stage at Dnieper station since 1972 was a unique element of the scheme. Today it is used more frequently, but still infrequently.

Then the water is sent to a storage tank, where it is chlorinated, and then the pump station of the second lift feeds it into the network. 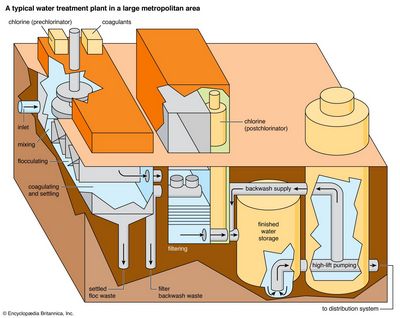 As for disinfection, in 2020 Dniprovska station must switch from disinfection by chlorine water to chlorine dioxide. It will be produced directly at the station by electrolysis. This reagent is the most effective today and ensures high safety, as chlorine storage today can become a man-made disaster in the city of Kiev.

It is worth noting that at the Dnieper and Desnianskyi stations, the water quality is constantly monitored by the laboratory, which is not the case in other localities. The situation is especially difficult in small towns.

In some cities of Ukraine borehole water is the main or even the only source of tap water, such as in Lviv or Kharkov.

We mentioned above the problems of underground water – hardness, high iron and manganese content, and hydrogen sulfide.

In this case, water purification stations will be radically different. The main process will be a catalytic purification of water from iron, rather than sedimentation.

This process is also considered on the example of water treatment in the city of Slavuta in Khmelnytsky region. The station was built recently, but in general copies the work of the traditional scheme, except for full automation of the process.

There are 14 wells working in the city, which provide 12 ts.m3/day. In this case, the traditional problem of high iron level is observed.

The water treatment station has seven filters, which are a column filled with special filtering material, traditionally used clinoptilolite. 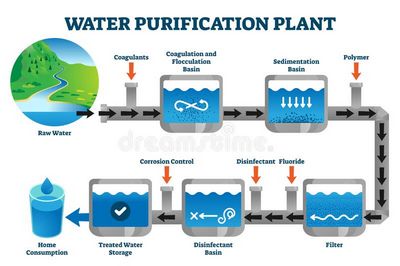 This material is natural zeolite and is produced in the Transcarpathian region, which significantly reduces the cost of treatment.

Then the water is disinfected with sodium hypochlorite.

As you can see, groundwater treatment systems are much more compact and simpler.

The company hydrogen.best-store-us.The company performs production and installation of systems of any complexity, including equipment of water channels. Below we list the objects, the reconstruction of which was carried out by our experts.

In this case we installed a system with a capacity of 18 m3/hour, which included:

The capacity of the plant is 250 cubic meters per day. The main problem was that the groundwater contained iron and manganese concentrations that were respectively 2.5 and 3 times higher than the maximum allowable concentration.

The station consisted of a number of components. 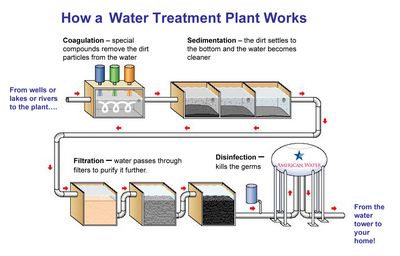 All vessels are made of food-grade plastic to the customer’s dimensions and parameters.

Reconstruction of a water treatment system in Izhevskoye settlement (Kazakhstan)

The aim was to completely modernise a water treatment plant with a capacity of 2,000 m³/day with a simultaneous elimination of iron, manganese and hydrogen sulphide in a single stage.m3/day.

It is worth noting that ultrafiltration is quite widely used in water treatment systems around the world. This technology has proven itself in terms of the quality of treatment, size reduction and high efficiency, irrespective of the quality of the raw water.

Why does the tap water run dirty??

If water goes through so many stages of purification, then why does it come out of the tap cloudy and yellowish? The fact is that after treatment in waterworks, it enters the pipeline system. Their inner surface is covered by a variety of plaque and biological fouling. Chlorine, which is dosed into the water to provide a prolonged disinfectant effect, oxidizes these substances, which results in the water already releasing interaction products. In addition to giving the water a negative organoleptic quality, they are carcinogenic.

Can we drink tap water??

In fact, the water supplied to the pipes by water utilities often meets state standards for drinking water. It may contain a certain amount of toxicants, but will not cause serious health problems. But then there are the unscrupulous water utilities and old water pipes that contaminate the water on the way to your faucet.

So to drink or not to drink, it’s up to you to decide. And we can provide high-quality water treatment equipment for your home.