Electrodeionization (CEDI) is a modern method of water desalination used in industrial applications. It is based on the phenomenon of electrolysis, or dissociation of compounds by passing current.

In fact, such systems are an improved version of ion-exchange filters.

The separate module is a casing which contains the anode, the cathode, the ion-selective membranes and the ion exchange resins.

The process consists of passing a current through the water between the cathode and anode, causing it to dissociate. Also two ion-selective membranes are installed, which pass only ions, but retain water molecules. The anode is cationic because it attracts positively charged ions with a negative charge, while the cathode is anionic by the reverse principle.

The space between the layers is filled with a mixture of ion exchange resins – cationic and anionic resins.

The figure visualizes the deionization process.

When the flow enters the resin-filled dilution chamber, several parallel processes are started. Strong electrolyte ions are removed from the water flow with a mixture of ion exchange resins. Under the influence of a strong DC field applied to the cell, the charged ions bounce off the resin and are attracted to their respective oppositely charged electrodes. Thus, these charged particles are continuously removed and transported to the concentration sections (between membrane and electrode).

As ions move toward the membrane, they can pass through the concentration chamber but cannot reach the electrode. They are blocked by an adjacent membrane containing resin with the same charge.

If the element contains several of these cells consisting of two membranes and ion-exchange resins, they will act in pairs as transport and working cells.

Ionization reactions occurring in the resin in hydrogen or hydroxide forms to remove weakly ionized compounds are listed below:

Their principle of operation is shown in the figure below. One of the leading producers of such elements is DOW (USA). In the production of industrial systems, hydrogen.best-store-us.com uses these elements.

2. Flat sheet elements
These membranes have a lower cost, but are somewhat difficult to maintain and operate.

Electrodeionization EDI Water Treatment Systems | Made in China by NEWater

Since the plant runs continuously and does not stop for scheduled regeneration, it is necessary to closely monitor the process parameters. This is necessary in order to provide for maintenance. 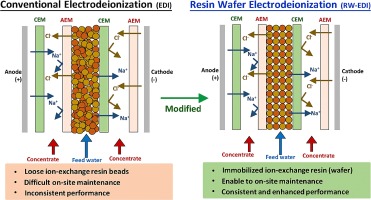 Possible factors that, to varying degrees, can affect the operation of the system are

Factors that indicate problems are increased salt content and reduced plant capacity by 10-15% of nominal capacity.

Performing chemical flushing about once a month.

1. No need for reagents or table salt for regular regeneration. 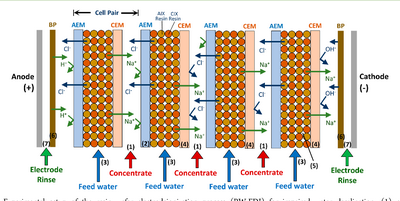 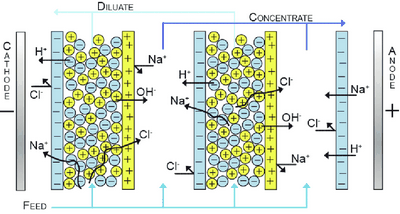 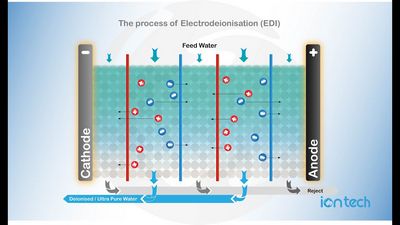 4. Small size (traditional systems are much larger than electrodeionization systems).

5. High purity. When reverse osmosis is used before CEDI systems, 99.9% of ionic impurities can be removed. 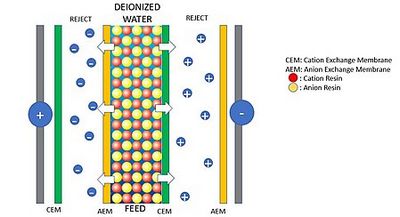 6. Environmentally friendly due to the absence of hazardous effluents and their low content.

1. CEDI cannot be used with water that has a hardness higher than 1 because calcium carbonate can create sediment in the concentration chamber, reducing performance.

3. Carbon dioxide will pass freely through the reverse osmosis membrane, dissociating and increasing water conductivity. Any ionic particles formed from carbon dioxide gas will reduce the resistivity of the water produced by the CEDI. Needs pH adjustment.