Alkaline water is one of the most popular water trends of our time. It is credited with curing cancer, lowering sugar levels and other benefits. Let’s try to figure out what’s true and what’s mythical in this story, and what hidden or not so dangerous in this trend.

What is alkaline water?

In fact, such water contains a set of minerals that provide a hydrogen index (pH) above 7. It is worth noting that pH – is not the only indicator that determines the alkalinity. There is also the alkalinity indicator (“alcalinity”) which is the sum of the hydroxyl ions (OH- ) and weak acid anions (carbonates, hydrocarbonates, silicates, borates, sulfites, hydrosulfites, sulfides, hydrosulfides, humic acid anions, phosphates) contained in the liquid.

Essentially, alkaline water is a solution of minerals that causes its pH. 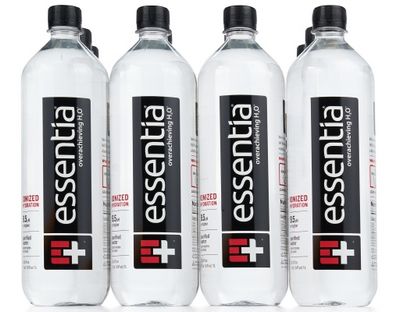 How to determine the pH level of water?

WHO recommendations and evidence-based medicine

To begin with, the permissible values of pH of drinking water according to the requirements of the World Health Organization and the national standards of Ukraine – 6.5 – 8.5. If the values are higher, the water is not potable and cannot be consumed regularly, being the main source of drinking water.

The document that substantiates certain levels of the hydrogen index states that the effects of acids and alkalis are determined by their strength and concentration. The main attention is paid to the fact that an increase in the level of acidity or alkalinity of water in centralized water supply systems can lead to their corrosive effect on the pipelines and, consequently, the release of heavy metals.

What about the use of water for drinking? Exposure to extreme pH values (pH 11 and above) leads to irritation of the eyes, skin and mucous membranes of the mouth and throat. Sensitive people may also experience gastrointestinal irritation. Exposure to water with low pH values leads to similar results.

To understand the arguments used by proponents of alkalizing, we decided to understand what the “alkaline diet” is all about. Once in the human body, food is broken down into certain simple compounds, including acidic and alkaline substances, which is obvious. A special index, PRAL (potential renal acid load), has been derived to evaluate foods. The principle of formation of this index conventionally shows which products cause the body to release more acidic ions and which alkaline ions.

Is Alkaline Water Really Better For You?

The formula for calculating these indicators looks something like this:

What role does water play in this situation? Since modern nutrition, according to followers of this movement, is considered acidic, alkaline drinking is an opportunity to neutralize it.

Can alkaline water be made?

You can do just about anything, high pH water is no exception. The most obvious and cheapest, and therefore common, method of obtaining it, is to add certain reagents to water (yes, everything you add to water is actually chemicals). When asked how to make alkaline water, Google offers a number of methods. Let’s talk about them chemically. 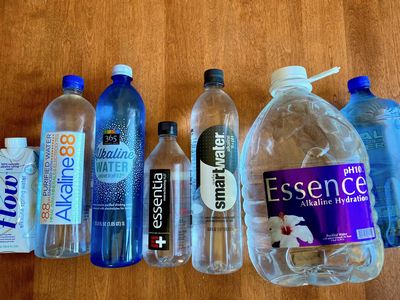 Hence the conclusion: water is not drinkable, it definitely should not be consumed systematically.

The second method, which caused quite a surprise: the infusion of lemon on two liters of clean water. Here, by the way, there are also many variations with the amount of lemons and liquid.

Let’s do simple chemistry again: one lemon is 6 to 10 grams of citric acid, depending on the size. Let’s take an average of 8 grams for our calculations. In distilled water the pH-value will be 2.28, in tap water it may be slightly higher – in the range of 4. This pH is acidic, not alkaline. But proponents of the “alkaline diet” believe that adding an even more acidic supplement to an “acidic” diet will cause the body to respond by alkalizing.

It is important to note that water with lemon should also be consumed with caution: it can cause destruction of tooth enamel, irritation of the mucous membranes and the esophagus. You also need to consider the presence of allergic reactions.

Perhaps such an alkaline water at home will be the most expensive, but the method is no less controversial.

This device works by a process of electrolysis. It usually consists of a reservoir that is divided by a specific ion-selective membrane and a set of electrodes: cathodes and anodes.

Depending on the intensity of the process and the number of electrode plates, different devices provide different pH of the water, some even allow to regulate it. On average, the lower PH limit is 4.5, the upper limit is 11.

It is necessary to notice that the device will not work effectively on strongly purified water and on usual tap water will concentrate together with hydroxide-ions and harmful impurity, for example nitrates.

In general, the issue of purity of the original water is very relevant, because it is difficult to talk about the benefits of drinking liquid, not purified from the basic contaminants. 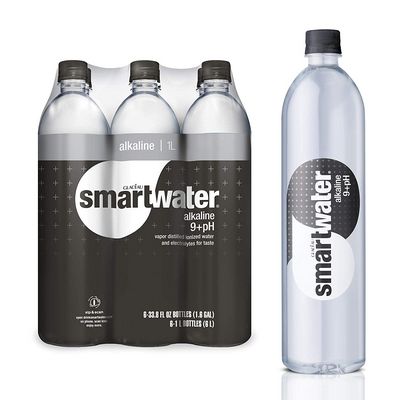 Of the popular waters in Ukraine, these include “Luzhanskaya”, “Polyana Kvasova”, “Svaliava”, “Borjomi”, which can be found on the shelves of supermarkets. Mineral composition usually contains a lot of hydrocarbonates, as well as other salts of alkaline (sodium, potassium) and alkaline earth (calcium, magnesium) metals, their pH varies from 7.5 to 9 units. It is worth noting that alkaline mineral waters are not recommended for systemic drinking, because many chemical elements significantly exceed the regulated standards.

Science generates information, sometimes doing so in the form of hypotheses, which it then refutes or confirms. Many trends in nutrition appear at the time of the hypothesis, but continue to be relevant, even after scientific refutation. We have not found the origins of alkaline water, but research to date, quite a lot. In general, when a new trend emerges, no matter whether it has been set by other scientists or by company marketers, researchers begin to look for the benefits and harms of a particular phenomenon. The same thing is happening now.

There are several major topics that come up regarding the use of alkaline water. We made a brief analysis of scientific publications and obtained certain conclusions.

One of the popular theses in support of high pH water use, is its effect on bone health.

In 2009 (Wynn, Krieg, Aeschlimann, Burckhardt) conducted a small study where they studied the relationship of acid-base water balance with bone resorption. This is the process by which old bone cells are destroyed to be replaced by new ones. The lower the level of resorption and the higher the mineral density, the stronger the bones will be.

In the study, young women were divided into two groups that took two different types of water at a rate of 1.5 liters per day. Changes in the electrolyte and peptide composition of urine before the study and after two and four weeks were studied. Acidic calcium-rich water was shown to have no effect on bone health when calcium content was sufficient, whereas alkaline bicarbonate-rich water resulted in some slight reduction in bone deterioration.

But it is worth noting that an expanded study of 55 publications on the relationship between acid-base balance and osteoporosis, which is a consequence of resorption, did not find strong evidence. If there is a link, it is not significant. At the same time in the Russian-speaking segment of google search more than 2 million.publications that predominantly recommend the consumption of such water, just for the prevention of bone disease.

Promotion of alkaline nutrition is one of the most popular unproven factors that are recommended for cancer treatment. That said, in 2016 (Fenton, Huang) conducted an extensive analysis of publications addressing this issue. The study analyzed 252 summaries of scientific articles and more than eight thousand citations. And in all the abundance of these works not a single publication was found with sufficient research validity, which would show the benefits of using alkaline water in therapy, it is worth noting that most studies are at the level of in-vitro, that is the experiment “in vitro”, when something affects the cell, such as in this publication. The studies above are carried out on experimental animals, such as these mice, which were not only given alkaline water, but also injected intravenously.

A burning sensation behind the sternum and in the esophagus, an acidic and bitter taste in the mouth occur when the gastric juice, which has a pH of 0.5, due to its strong hydrochloric acid<3, is taken up into the esophagus.

Alkaline water in this case is primarily just an antacid. This is the reason why you feel better with “salty” bottled water. In the past, they even used baking soda to treat heartburn. The reaction looks something like this:

As for direct studies, blind randomized trials have confirmed that alkaline water can have a positive effect on people with gastrointestinal symptoms.

There was also a study that confirms that water with a pH of 8.8 can destroy an enzyme involved in the formation of gastric juice, pepsin. It’s stable up to a pH of 7.4, and when it’s broken down, it causes the acidity to drop. It is worth noting that the studies were conducted in the laboratory, large-scale clinical studies are needed to confirm the effectiveness for the human body.

In 2001 a clinical study was conducted in a group of people with group II diabetes. It was monitored for 3 to 6 months of drinking alkaline water. The results confirmed lower blood pressure, blood sugar, and cholesterol levels.

In 2017, a similar study was done again for four weeks. People with diabetes of the second group were divided into 4 groups of 7 people and consumed water with different pH levels (7, 8, 9,5 and 9-11,5). It is worth noting that the change in sugar levels was strongly influenced by pH.

But it is important to realize that no long-term studies have been conducted in this case, so today the duration of use is limited to 6 months without possible side effects.

In addition to what we mentioned above, here are the main factors in more detail.

If you consider the information above in detail, you can come to a number of conclusions.

How to drink alkaline water correctly?

We have tried to analyze the information very carefully to answer the most common questions. If there is anything else you would like to ask about, feel free to post in the comments.

How to make alkaline water?

In this article, we have looked in detail at the ways of obtaining water with a high pH. The most popular methods are:

What is alkaline water??

Alkaline water is characterized by a pH value above neutral, i.e. 7. A pH value of 7 to 8.5 is characteristic of slightly alkaline water. Such values are indicators of physiologically wholesome water. Most salty mineral waters (Luzhanskaya, Polyana Kvasova, etc.) have a pH level close to 8.5.

Much is said about the benefits of alkaline water. In this article, we will understand what it is, as well as the myths that go around it.

Can we drink alkaline water every day?

The answer is not yet known. Probably all depends on the mineral composition, for example, slightly alkaline waters with pH 8-8,5, provided that all indicators meet the requirements for drinking water, are drinkable. As for the rest of the alkaline water, we found no sources to support the long-term safety of such drinking.

Distilled water will have a pH value of 2.28, tap water may be slightly higher