For some reason, rainwater is often called the ideal of purity. In fact, if you look at it from a chemical point of view, it’s pretty hard to agree on something like this. Today we will talk about what acid rain is, and where it comes from.

Ok google. Why does it rain??

To understand how acid gets into stormwater, you must first understand how rainwater is formed. There is a cycle of water in nature. When the sun shines on the surface of water in the oceans and surface water bodies, it begins to evaporate. We can observe a similar process when water is boiling and steam is released over it. It is difficult to see steam on the water surface in natural processes, yet water molecules bounce off the water surface and take off into the air. We wrote earlier about the unique property of water to be in three aggregate states and the processes of evaporation.

These molecules rise higher and higher in the air masses as they pass through layers of cooler air and are cooled and condensed (combined) into droplets and small ice crystals, depending on height. An accumulation of supercooled water droplets and ice crystals is called a cloud.

When the mass of crystals becomes critical, they fall to the ground as rain.

Why does acid rain occur??

Initially, rainwater in clouds is practically a distillate, as it is produced by evaporation. Its chemical changes begin as soon as the droplets hit the ground and pass through the atmosphere, that is, the air around us. Accordingly, the hydrogen index, which describes the acidity, is approximately 7. Acid rain is rainwater in which acidic oxides from the atmosphere are dissolved. Let’s look at how it works. 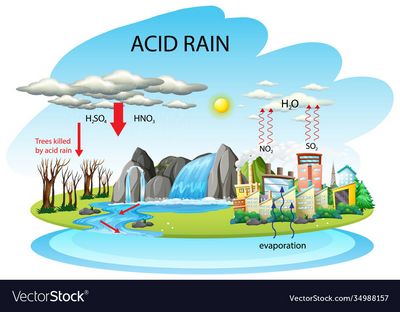 To begin with, the air we breathe initially contains 0.9% carbon dioxide. The solubility of carbon dioxide is 28 times that of oxygen. That is, in the process of movement, a drop of water is saturated with carbon dioxide, resulting in a weak carbon dioxide: 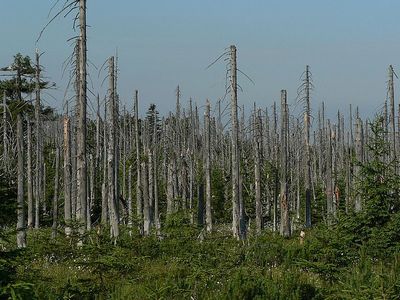 The hydrogen index, that is, the pH of pure rain at the time it hits the ground may be 5.6. Since carbon dioxide is quite weak, it decomposes quickly and is released from the water.

But in today’s world everything is more complicated, in addition to carbon dioxide, the air is rich with a huge number of other compounds. In large cities and industrial centers, air pollution is called “smog”.

In the issue of acid rain, it is worth touching on sulfur and nitrogen oxides. These substances enter the air as products of combustion of organic fuels in thermal power plants and automobiles, manufacturing processes of metal processing plants and other enterprises. They can cause dryness of the mucous membranes of the eyes and nose, coughing and choking, and exacerbations of lung diseases.

Nitrogen dioxide (NO2) is probably the most common component of smog. With imperfect purification, it is emitted during combustion of fuel in thermal power plants and even from car exhaust pipes and has a characteristic red color, for which it is called “fox tail.

Nitrogen monoxide (NO) – when burned, it is released together with dioxide and forms dimers (N2O2).

Sulfur dioxide (SO2) is a transparent gas, which in high concentrations is toxic, in weak concentrations – it affects the mucous membranes of the eyes and nasopharynx.

Acid Rain And The Sneaky Policy That “Solved” It – Cheddar Explains 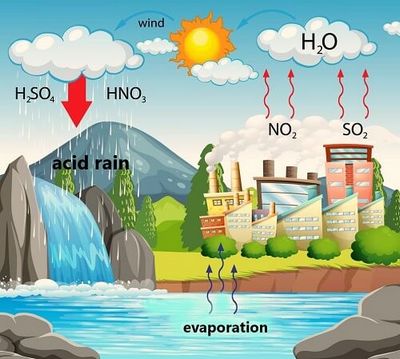 Sulfuric anhydride or sulfur trioxide (SO3) is emitted mainly at chemical plants.

The mechanism of reactions of these gases with water is very simple: 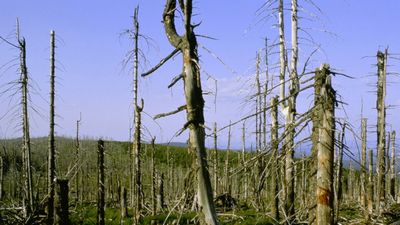 2. In parallel, sulfur dioxide is oxidized by nitrogen dioxide to form sulfate acid: 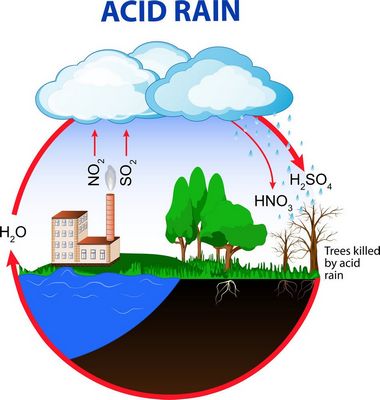 3. Another process is the formation of sulfuric acid from anhydride:

This is actually what the answer to the question of what acid rain is.

Acidity, if used to represent the pH of the medium, can be as high as 3. By comparison, the pH of a weak solution of citric acid will be about the same. Sediments with a pH of<5.6 are called acidic; they can cause a shift in the acid-base equilibrium in soils and bodies of water and lead to species change or die-off of flora and fauna.

It is important to note that sometimes rainwater even in industrial regions or large cities has a neutral or even slightly alkaline pH. This does not indicate quality or purity, but only that due to the reactions inside the droplets, the acid is neutralized by alkaline reagents. The most prominent example would be the presence of ammonia in the air:

Chemical processes are continually occurring even in a drop of water as it flies from the sky to earth. As you can see, pollution makes even the cleanest rainwater dangerous.